By Ilavaluthy M July 10, 2014
India knows a lot about the so-called first war of independence and Mangal Pandey. Least does it know that it was not the first uprising of its kind. In fact, the first large-scale revolt against the British took place a thousand and eight hundred kilometres south, in a town called Vellore in 1806, twenty-one years before Mangal Pandey was even born.

The revolt:
On July 10, 1806, at three in the morning, five hundred Indian soldiers from the Vellore fort, armed with hundreds of muskets and two small cannons, slithered out of the Indian barracks and stole their way to where the Europeans were stationed. Briefly, they waited outside the European barracks for a signal to be issued. Finally when the signal came, the doors of the Europeans barracks were blown away. Some Indian soldiers rushed into the barrack and opened fire on the British soldiers who were asleep. Others blasted the barrack from the outside. The British soldiers who were stationed in the Vellore fort did not fight back. They were gravely outnumbered and outgunned and so, they simply tried to flee. Two hours later, when the sound of gunshots died and the smoke cleared, fifteen British officers and over a hundred British soldiers were dead. Col. Fancourt, the commander of the fort, was one among them. 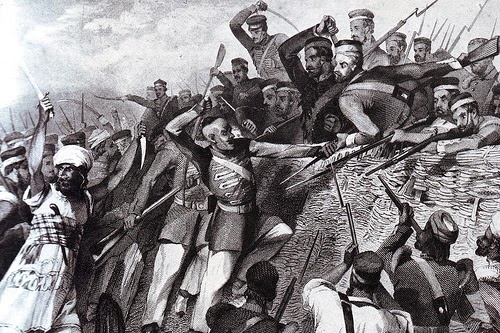 At dawn, Jamaidar Shaik Cossim, one of the chief plotters and the leader of the rebellion, hoisted Tipu Sultan's Royal tiger flag over the fort. Tipu's second son Fateh Hyder Bahadur was declared king. However, a few hours later, the mutiny lost direction. While a few Indian soldiers started looting the houses of the Europeans, others kept themselves busy abusing the soldiers who did not join the rebellion. Meanwhile Shaik Cossim and some other leaders were holding talks with Tipu's sons who were reluctant to take charge. In this storm of confusions, a British officer escaped from the fort and alerted the garrison at Arcot.

Nine hours after the break out of the mutiny, a relief force was sent from Arcot to Vellore under Sir Rollo Gillespie. Two cavalry units(19th light dragoons and a cavalry unit from Madras) with lots and lots of galloper guns arrived at the fort two hours later. Along with the few English men from the fort who had survived the initial shootout, Sir Rollo Gillespie took over the fort. The rebelling Indian soldiers were hunted down and killed. The few who took refuge inside the fort were brought out and executed at point blank range. In all, eight hundred Indian soldiers lost their lives in the mutiny which was completely silence by two in the afternoon.

It is said that Rollo Gillespie could not get into the fort through the gates as it was heavily manned by Indian soldiers and he gained access by climbing a wall using a rope and sash that were lowered to him by the survivors of the shootout. Then, he seemed to have led an offensive with the survivors against the mutineers along the ramparts of the forts that were still under the control of the British. Later, the 19th regiment joined them and together, they put down the mutineers.

The immediate cause:
Just like the rebellion of 1857, the immediate cause of the rebellion of 1806 was also religious. In November 1805, General Sir John Craddock, the commander-in-chief of the Madras army ordered that the Indian soldiers must wear a round hat with a cow leather cockade in place of the turban that the Indians were used to wearing. In addition to that, Hindu soldiers were forbidden from wearing any religious marks on their forehead and the Muslim soldiers were asked to shave off their beards and regulate their moustaches. The Indian soldiers were enraged by this order as it interfered directly with their religious freedom. The order was also seen as the first step by the British towards converting Indians to Christianity.

Other causes:
The Fakeer movement that was gaining importance in the late 18th century contributed directly to the rebellion. The Fakeers were mystic mendicants who went from town to town conducting discourses, prayers and puppet shows. They insisted on unity among Indians and necessity to throw out the British. They fanned out all over South India speaking highly of rebels. Their message - We are many and they are few - was very well received by the Indians who were inspired by the message to rebel against the British. The Fakeers were one of the main reasons for the many uprisings against British between 1750 and 1800 in South India.

The other reason that led to the uprising was the presence of Tipu's sons in the fort.

After the death of Tipu Sultan in 1799 in the battle of Srirangapatna, his family (at least twelve sons and six daughters along with a wave of servants) was sent to Vellore fort to live under the custody of the English East India company. There, they were housed in the palaces of Arcot Nawab which lay within the precincts of the fort. It is where some of the leaders of the uprising namely Subedar Noor Mohamed, Subedar Shaik Hossain and Jamaidar Shaik Cossim met with Tipu's sons, Moiz-ud-din Sultan and Fateh Hyder Bahadur. It is where the initial plan for the uprising was drawn.

The day for the uprising was chosen to coincide with the marriage of one of Tipu's daughter. It was decided that hundreds of soldiers would gather in disguise for the marriage on July 9, 1806 and would take the fort down early next morning, a few hours after the marriage was over and when the fort was still in festive mood. The idea was to catch the unsuspecting British off guard. Once the fort fell and all the British were killed, independence and the sultanate of Mysore were to be declared. It must also be noted that Tipu's sons never really participated in the plot nor the act. In fact it was their reluctance and lack of leadership qualities that led to the failure of the mutiny.

Aftermath:
- An inquiry was ordered to investigate the mutiny which found all those involved guilty. Many of these men were executed by hanging or by being shot by a firing squad. It is said some men with minor offences were relocated to other parts of the country.
- The 69th regiment and the 23rd regiment of the Madras battalion that rebelled were disbanded.
- Fearing another revolt, Tipu's sons and daughters were sent to Calcutta as it was considered dangerous to keep them close to Mysore.
- An order was passed that abolished British interference with social and religious customs of Indians.

It is really sad the Vellore mutiny has been written out of Indian History. We don't read it in schools and very little research has been done on this, thanks to all previous Indian governments that have considered anything south of Mysore a part of Srilanka. This article is just to keep the story or at least what we know about it alive.

Unknown said…
i wish that Rajinikanth acts as Tippu Sultan and brings the truth. PROF. Akbar KHAN
September 24, 2015 at 9:20 PM


The information provided was extremely useful and informative. Thanks a lot for useful stuff..

Anonymous said…
Vellore revolt not mutiny holds a mention of honor in the book 'First war of Independence' by Veer Savarkar, he praises the revolt and mentions that torture of the troops in public & insults to the descendants of tiger of Mysore, was the reason that Arcot did not join the war in 1857.
Indian military history needs re-writing especially 1761, 1857, Azad Hind fauj
Anagre & the second naval genius Karanjia, nemesis of western navies need to be re- discovered and presented to our citizens.
Jai Hind
March 11, 2016 at 11:21 PM

Popular posts from this blog 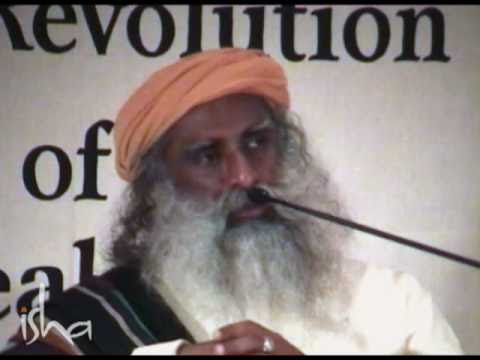 Mr. Jagadeesh, to some Jakki Vasudev and others Sadhguru, was introduced to me by a friend who shared one of his videos with me. It was about Hinduism and we seemed to share some non-mainstream ideas on that topic. Curious, I went ahead and watched some more of his videos on Youtube. I felt the man spoke sensibly, had a way with words, knew when and what to joke about and exuded confidence. After a few videos, he got repetitive to me and I moved on. This must be three or four years ago.  About a year ago (December 2015), when the floods struck Tamil Nadu, some of my friends were looking to ship some relief material to Cuddalore, the town that took the most damage. We were looking for ways to ship the goods and someone suggested Isha. When I approached one of my friends at Isha, he mentioned that anything shipped by Isha will be distributed under the name of Isha. We had no problems with that. Our main concern was to get the things to those who needed them. We did not bother under who
Read more 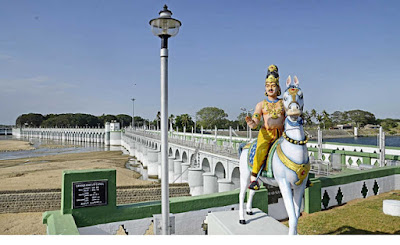 I write this article after I read a post in one of my facebook groups. The group is called Ponniyin Selvan , named after the greatest Tamil historical fiction written in modern times.  The beginning: I saw Baahubali 2 a few days ago. One of the scenes in the movie disturbed me. When Ballala is crowned the king of  Mahishmati (Magizhmathi in Tamil version) , various wings in his army offer their salutations. In this scene and in the first movie too, Kattappa is introduced as "Karikala" Kattappa (in both Tamil and Telugu versions), a slave to the kingdom who bows to the feet of the Ballala. Now, anyone familiar with Tamil history will know that Karikalan (lived in the 2nd century) was one of the greatest Tamil kings. He built a dam across Cauvery that the British called the Grand anaicut because it was superior in technic to other dams from the period.  Now, naming a slave Karikalan and making him bow hurt me very badly.  However, I just let it go then until I saw a post
Read more

By Ilavaluthy M August 15, 2015
You have to know me as a person before you read this article. This is not history, but a perspective and it is absolutely necessary to know the relevant details about the writer before reading their perspectives.  I'm not a Brahmin. I was born into the Nadar caste, which was suppressed by the then upper castes in the colonial era and liberated later. However, I do not consider myself a part of that caste anymore. Under the cover of building an identity and a sense of community, organised castes have developed only hatred towards other castes and I do not belong there. Though I'm an atheist and though I do not practice/preach religious rituals, my spiritual(not religious) beliefs are rooted in the philosophy of Tamils, most of which modern-day Hinduism has encapsulated. So, I'm part atheist, part Hindu (rather a strange combination). I love Tamil immensely. I will do anything to promote her, but I will not impose her on a non-Tamil speaker. I believe in freedom, equality a
Read more